We’ve surely all seen movies portraying a dystopian future, and for me personally, they virtually never ring true. Generally, Hollywood fills the screen with images of a sure-to-come existence that I just can’t buy.

For example, are we really all gonna get neck tattoos?

But a video posted to Twitter is making me doubt the soundness of my cynicism.

If you want to be very, very disturbed, take a look at a tweeted clip of what, according to its description, is a camera-wielding robot patrolling a park in Singapore in order to enforce social distancing edicts.

If it doesn’t creep you out, then that creeps me out.

One of the creepiest and most dystopian things I’ve seen since the pandemic began: a terrifying camera-equipped remote-controlled robot patrols Bishan-Ang Mo Kio Park in Singapore to — for now — warn about social distancing. Look at the fear. Story: https://t.co/12QfT1mcyZ pic.twitter.com/hBGUhmC7N7

The machine looks like a murder hornet and walks like a dog, and I hope to never see one out and about in America. But I believe I probably will. 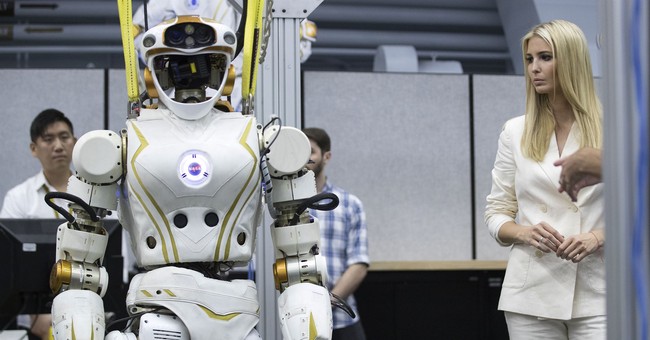 Not that robots have no place — they absolutely can make the citizenry safer, as well as doing the same for those who put their lives on the line for us daily.

But a robot monitoring us? No thanks.

Technology is a wonderful thing, but so is privacy and the freedom from being watched by those who count themselves as our authorities.

As we appear headed toward an increasingly observed existence, is there a way to reverse course?

We’re farther along than I had realized; the use of imposing four-legged droids is new to me, but it isn’t to the Western world.

[I]magine [robot dog Spot] is walking down your sidewalk, sitting on top of a building, or perhaps listening to your conversations as you sit in what should be a private place. Don’t worry, it’s not doing that because it’s learning what it can for its future robot takeover, it’s doing so because the police told it to.

Thankfully, Brandon noted that “civil rights groups are already gearing up to put Spot down.”

God VS. Gavin: 3,000 California Churches Choose to Defy the Governor’s Orders and Reopen on Pentecost Sunday

Take a Peek Into Portland’s Drive-Thru Strip Joint, and Gawk Over Its Name for Disrobed Deliveries

Keep It Up, California: A Major City Gives Its Homeless Hotel Rooms, Alcohol, and Drugs