To anyone watching even a smidge of CNN and MSNBC’s coverage of the Republican National Convention over the last four days, it was “almost” like the two Trump-loathing networks were having a contest to see which of them could spew more vile bile about Donald Trump.

“Impressive,” huh? Even for MSNBC.

Reid tweeted out a plug for an op-ed in The Nation, written by frequent MSNBC guest Elie Mystal, who suggested the Republican convention “has been all about using Black people to convince white people it’s OK to vote for a bigot.”

“If you read one thing today, this would be a good choice. @ElieNYC writes about the outrage and pathos of the Black people the #RNCConvention trotted out to make white Americans feel good about white nationalism.”

If you read one thing today, this would be a good choice. ⁦@ElieNYC⁩ writes about the outrage and pathos of the Black people the #RNCConvention trotted out to make white Americans feel good about white nationalism. https://t.co/V2xJzf87Dr 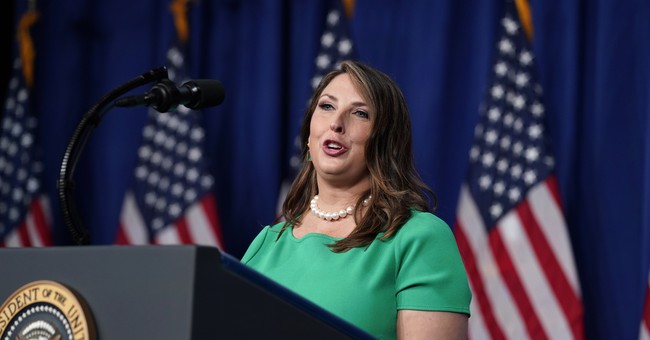 “Most white [sic] Republican voters don’t need permission to vote for white [sic] supremacy. They’re racist themselves and think being racist is just common sense. The message is not subtle, but Donald Trump’s willingness to say the quiet part out loud is why so many racists love him.

“The irreducible core of his base is white [sic] people who think being openly racist and violent toward Black people is an inalienable right that has been taken from them by ‘cancel culture.’ Trump gives these people a bullhorn, and they love him for it.”

“The Black people who were allowed to speak at this convention were there to transmit one message to white [sic] listeners: ‘It’s OK.’ Trump’s racism is OK, because here’s one of Trump’s Black golfing buddies.

“Cops and vigilantes shooting Black people is OK, because here’s a Black ex-con who complied with the police and is still alive. The banality of these Black validators can be seen most clearly when you compare their roles to what the white [sic] speakers were allowed to do at the convention.”

So what was in it for the Black speakers who expressed their unwavering support for Trump and the Republican Party? Mystal said they wanted nothing in return —as dismissively as he could, of course.

“The Black speakers seemingly wanted nothing. There were no additional policies they desired or issues they wanted addressed.

“They had no goals they wanted the next Trump administration to accomplish and no legislation they wanted Republicans to pass.

“Instead of an agenda, the Black people were just there to say, ‘Thank you, white [sic] folks,’ and fade off-screen.”

Then again, when one goes through life inanely concocting “racism” and “white supremacy” around every corner, this is what happens.

Writer Kali Holloway, who is also the director of the Make It Right Project, a new national campaign to take down Confederate monuments, echoed Mystal’s missive in an op-ed for Daily Beast on Wednesay. That whole “token” thing.

“No GOP event is complete without a few token minorities to absolve the party of its overt race-baiting and appeals to white [sic] grievance,” Holloway said, claiming Cameron’s attack against Joe Biden’s “You ain’t black” admonishment of Blacks who “have a problem figuring out whether you’re for me or Trump,” was “actually to an audience of White Republicans who love it when Black conservatives give them a pass for their racism.”

Nazi Propaganda Minister Joeseph Goebbels — no, I’m not comparing liberals, MSNBC, Joy Reid, or anyone else to the Nazis — infamously wrote: “If you tell a big enough and keep repeating it, people will eventually come to believe it.”

That is exactly what the Democrat Party and its sycophantic liberal media lapdogs do, 24×7, 365 days a year.

“Race-baiting” is the purview of The Left, not the Right.

“Racism” — by its original definition — is about treating a specific group of people differently based solely on their ethnicity or color of their skin. That is exactly what the Democrat Party does.

Black conservatives, by virtue of the color of their skin, are supposed to live on the Liberal plantation. Without question or concern. And if “they” stray? They are to be called “tokens,” “house negroes,” “uncle-Toms,” and worse.

No one has illustrated that reality better than former New Black Panthers Leader Malik Zulu Shabazz, who in 2011 called Barack Obama “a bamboozling buck-dancing Tom,” who the racist black nationalist claimed “represents the White man.”

Shabazz’s 2011 words speak volumes — about the Left and its purposeful message of racial divisiveness — in the 2020 world of George Floyd, Black Lives Matter, and so-called “systemic racism.”

On the final night of the 2020 Republican National Convention, MSNBC took home the trophy.