Home » Trump News » Kyle Rittenhouse Did Nothing Wrong. Conservatives Throwing Him Under the Bus Need to Cut It Out Now

“They are eaten up with the unrequited desire to be loved, respected, and admired by people who actually loathe them.”

That trenchant description is from a piece my colleague Streiff wrote last week. It was on RNC head Ronna McDaniel’s lamebrained expression of hope that we’d be seeing some sympathetic shout-outs to Jacob Blake from speakers at the GOP convention.

As Streiff noted, Blake is “a common criminal, a perpetrator of domestic violence, who was shot resisting arrest.” We’ve since found out the cops were trying to arrest him on an outstanding warrant for rape and that Blake was either reaching for or already had a knife when he was shot.

The media’s systematic efforts to keep these facts from being widely known caused the city of Kenosha, Wisconson to be torn down and burnt to the ground.

Expressions of solidarity with Blake at the GOP convention would have been both politically unwise and morally reprehensible.

Streiff was describing the GOP political establishment. But the tendency to, as Winston Churchill put it, to keep feeding the crocodile in the hopes he’ll eat you last is ubiquitous on the right.

We just saw an example of it yesterday in an otherwise right-on-target column conservative actor Dean Cain published in the Washington Examiner condemning the “cancel culture” that’s gradually become such a destructive force in American life.

I actually like Dean Cain a lot. If you haven’t seen his performance as Peter Stzrok in the play constructed out of Stzrok and Lisa Page’s text messages, FBI Lovebirds, you’re missing something that’s as funny as it is informative.

And there was a lot of sensible stuff in Cain’s op-ed which my colleague Becca Lower did a great job covering.

But it’s unfortunate that in the course of defending some remarks Tucker Carlson made about Kyle Rittenhouse against the latest outraged mob howling to get Carlson fired, Cain felt the need to throw a bone to that very mob.  Cain both began and ended his op-ed by asserting that “what Kyle Rittenhouse did was wrong.”

Kyle Rittenhouse is in jail where leftists are openly calling for some criminal sympathetic to their cause to murder him. 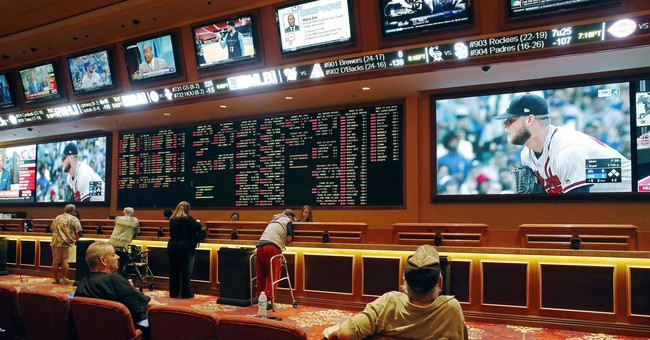 Gofundme deleted the fundraising campaign to help his family pay the extraordinary amount of money it’s going to cost to keep him from spending the rest of his life there.

Facebook is blocking links to the alternative campaigns that were set up.

And, most, importantly, Kyle Rittenhouse did nothing wrong.

The law doesn’t operate in some hermetically sealed container, immune from any outside influence. Kyle’s ultimate fate depends as much on the battle over public opinion as it does on the one his lawyers will be waging.

So an unbelievable amount of harm is done to Kyle when a well-known conservative actor like Dean Cain gives a blatantly misleading account of what happened that night in Kenosha like this:

In August, a 17-year-old decided to pick up a rifle and go patrol the streets of Kenosha, Wisconsin, in a misguided attempt to help restore law and order. This should never happen. Unfortunately, the tragedy that ensued took the lives of two people and inflicted additional heartache and pain on many others. What Kyle Rittenhouse did was wrong. No one should ever take the law into his or her own hands.

Kyle’s confrontation with his two assailants is on video. It couldn’t possibly be clearer that he made every attempt to not have to resort to shooting anyone and only did so when it came down to his life or theirs.

Yet Dean Cain makes no mention that Rittenhouse was literally fighting for his life against depraved criminals.

One of the cretins trying to murder Kyle, Joseph Rosenbaum, whose death Dean Cain describes as “tragic” was sentenced to 12-and-a-half years for sexually abusing minors, where that included outright rape. According to his pre-sentencing report, Rosenbaum’s depravity came to light when the mother of one of his victims, who were between 9 and 11-years old, “found a burn mark on her son.”

If someone had hunted Rosenbaum down and murdered him in cold blood to make him pay for raping little boys, a lot of people would be defending his actions and many more would be disinclined to judge them too harshly. But Kyle Rittenhouse kills the worthless piece of scum in self-defence, and a leading conservative gives aid and comfort to the twisted leftist mobs trying to get revenge for their fallen comrade.

The second criminal who died because he was trying to murder Kyle Rittenhouse wasn’t exactly a saint either. Anthony Huber, was arrested in 2012 on more than a half-dozen charges, including “Strangulation and Suffocation,” “False Imprisonment,” “Domestic Abuse,” “Use of a Dangerous Weapon,” and Battery. He wound up with a two and a half year sentence after pleading guilty to the first two.

While on probation in 2018, Huber’s predilection for violence again came to the attention of law enforcement when he was arrested for “Domestic Abuse“, “Disorderly conduct,” and “Battery”. After pleading guilty to the first two, he was sentenced to more probation, despite having committed his latest crimes while already on probation for his earlier ones.

Anyone discussing his case without mentioning that he was clearly acting in self-defense or the kind of scum he was dealing with is doing Kyle Rittenhouse a grave disservice and endangering both his life and his cause.

But many conservatives who accept that Kyle acted in self-defense balk at defending him. They’re troubled because he showed up with a gun to help protect Kenosha against mobs of deranged hooligans who were literally trying to destroy everything the decent people living there had worked their whole lives to build and would have gladly slaughtered them just as two of them tried to slaughter Kyle Rittenhouse.

To those conservatives inclined to disown Kyle over such concerns, there’s only thing to be said:

A friend of mine sent me a message pointing out that the actual definition of the word vigilante might surprise a lot of people.

A member of a self-appointed group of citizens who undertake law enforcement in their community without legal authority, typically because the legal agencies are thought to be inadequate.

As my friend when on to point out:

If you look at video from Tuesday night, the night before Rittenhouse and dozens of others came to Kenosha armed, you see rampaging looters, vandals, and arsonists.  Local police are nowhere to be found, and the National Guard forces are only 250.  This is 48 hours after the shooting, and lots of agitators had made their way to Kenosha from Chicago and Milwaukee.  If you look at the definition, it refers to citizens enforcing the law due to the INADEQUACY of local police.  That seems to have been the situation in Kenosha on Tuesday night, which led to the presence of people like Rittenshouse on Wednesday night.

Dean Cain deserves a lot of credit. As Becca pointed out in her piece on his op-ed, as a reserve police officer with the St. Anthony, Idaho, police department, he doesn’t just talk the talk, he walks the walk.

But he and a lot of other conservatives who find themselves troubled over Kyle Rittenhouse having shown up to help defend the people of Kenosha don’t seem to have given enough thought to what was happening.

It’s important to not get stuck in ordinary ways of thinking when truly extraordinary circumstances occur. Law and order had completely broken down in Kenosha, Wisconson. Decent hard-working people watched their lives work turned to rubble and burned to the ground by mobs of crazed degenerates who would have gladly added their bodies to the pile of smoldering ruin. They were unable to count on any help from law enforcement.

Instead of thinking about Kyle’s actions from the comfort of your safe home far removed from those awful nights in Kenosha, Wisconson, try to imagine them from the perspective of an elderly resident, peering through window blinds at the destruction unfolding, knowing that no police will be coming to save them should their home become the one of the targets.

The sort of passivity implicit in conservatives who attack Kyle Rittenhouse for stepping in and trying to help is more frightening than the vandals responsible for tearing Kenosha and too many other American cities down this summer.

Given all that Kyle’s suffering from prosecutors on the side of the crazed mob of vandals, it clearly wasn’t prudential of him to take the risk he did.

But anyone claiming that Kyle’s willingness to risk his own life to try to stop the damage caused by the lawlessness state of chaos represents anything less than heroism is advocating for a kind of passivity in the face of the total breakdown of civilization that is going to get a lot more people killed if the media keeps inciting these riots.

And if conservatives don’t stop feeding the mobs’ unjust narrative about Kyle, they may very well get him killed as well.