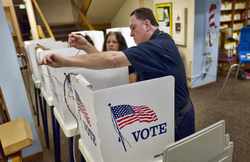 Real Clear Opinion Research polling director John Della Volpe discussed new research on why a majority of Democrats and Republicans across every generation say they are dissatisfied with the state of our political system Thursday on MSNBC’s “Morning Joe.”

Della Volpe discussed the poll’s findings in a new piece for RealClearPolitics titled “Why Our Current Politicians Leave Americans Wanting.”

“This is a poll that was actually conceived a generation ago by Pat Caddell, a famous pollster who helped elect Jimmy Carter back in 1976,” he said. “He was focused since the 1980s on this sense of mass alienation between Washington D.C. and the people.”

“He created this Smith Project poll inspired by ‘Mr. Smith Goes To Washington.’ And what this poll finds is that despite the fact that he and so many others have been asking these questions, we still find that 80% of Americans essentially feel alienated from Washington and are looking for someone who can tap into the culture, break it up, and inspire not just a new generation but all generations into something that makes America stronger and more prosperous.”

In the poll, 84% agreed that “the country is run by an alliance of politicians, media pundits, lobbyists and other moneyed interest groups for their own gain at the expense of the American people.”

Elites vs. the population is “the issue that transcends party, generation, almost anything,” Della Volpe added. “We had 25 issues we tested, everything you can think of from climate change to jobs to healthcare and infrastructure. Government ethics and corruption was number one out of 25. I was frankly surprised by that. Almost a majority, 48%, rated that a 10 on a 0/10 scale. So there are elements, clearly, that each of the campaigns from Democrats to Trump that are tapping into this, but I think America is still wanting someone who will make this a priority.”