According to White House Press Secretary Kayleigh McEnany, the president soundly rejects any calls to strip away resources from law enforcement.

During a press briefing Monday, McEnany clarified the White House’s position on the ‘defund the police’ movement, which is one of many proposals put forward in the days since George Floyd’s death came to the public’s attention and sparked protests across the nation.

President @realDonaldTrump stands staunchly against this astonishingly radical and amazingly counterproductive idea that would jeopardize the safety of Americans! pic.twitter.com/4ND1C4KeGe

While some proponents of ‘defund the police’ have argued the phrase is a symbolic call for structural reform of law enforcement, the movement has already led to concrete policy changes with far-reaching effects. This includes plans in to strip the LAPD of $100 million in funding and the announcement by Minneapolis City Council members of their intent to fully disband the city’s police department.

The president, McEnany stated, recognizes the need for reform highlighted by Floyd’s death, but rejects the enactment of policy along the lines of these more extreme proposals.

“This is extraordinary…this is rolling back the protective layers that protect Americans in their homes and in their places of business,” she stated. “He’s appalled by it and it’s remarkable to hear this coming from today’s Democrat Party.” 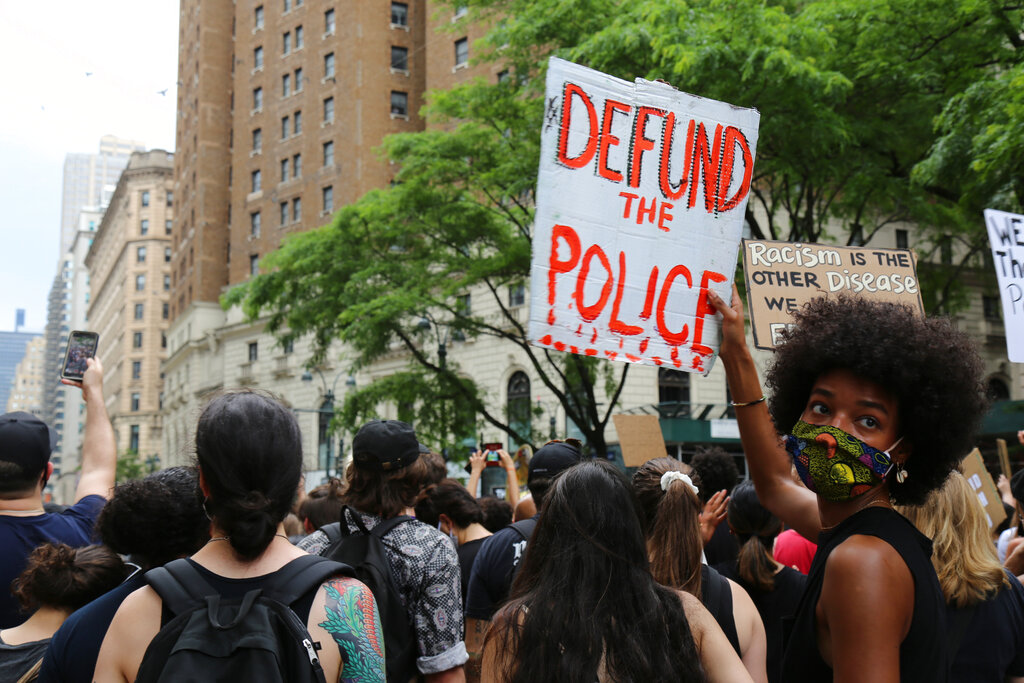 FILE – In this June 6, 2020, file photo, protesters march in New York. Since Floyd’s killing, police departments have banned chokeholds, Confederate monuments have fallen and officers have been arrested and charged. The moves come amid a massive, nationwide outcry against violence by police and racism. (AP Photo/Ragan Clark, File)

McEnany also turned to the issue of “qualified immunity,” which is a legal principle shielding public officials from civil lawsuits stemming from actions undertaken during the performance of their duties so long as their behavior has not violated any of the plaintiff’s clearly established constitutional or statutory rights.

According to the press secretary, although the administration is working on a range of policy proposals for police reform, the president does not welcome calls to scrap this protection outright in the case of law enforcement officers.

“He’s looking at a number of proposals, but there are some non-starters in there, I would say, particularly on the immunity issue,” she explained. “You had AG Barr saying this weekend he was asked about reduced immunity and he said, ‘I don’t think we need to reduce immunity to go after the bad cops because that would result certainly in police pulling back,’ which is not advisable.”

While the president recognizes there are indeed cases of police misconduct in need of addressing at the policy level, McEnany highlighted these are not representative of the majority of law enforcement officers who, for the most part, carry out their duties responsibly.

“He definitely believes there are instances of racism, but look, he believes our law enforcement are the best in the world,” said the press secretary. “He believes that by and large, they are good people.”

Democrats’ calls to defund the police are dangerous!

Doing so would weaken the rule of law & cause chaos in the US.

President Trump will ALWAYS fight for law & order & stand up for the men & women in blue who protect American communities.