FILE – In this May 28, 2020, file photo, mail-in ballots are processed at the Chester County Voter Services office in West Chester, Pa., prior to the primary election. (AP Photo/Matt Rourke, File)

State officials all over the country sent mail-in ballots to voters amid the coronavirus pandemic to protect citizens and encourage social distancing.

Some states are now seeing their highest voter turnout in years. Voter turnout reportedly surpassed 2016 levels in at least four of the eight states that held primaries this week

Iowa Secretary of State Paul Pate decided to mail absentee ballot request forms to every registered voter and extend the voting period by 11 days. The state had its highest ever turnout for a primary with about 524,000 votes cast. More than 400,000 voters were from absentee ballots.

Pate said the goal was to ensure citizens did not have to stand in long lines and risk exposure.

We have surpassed the all-time turnout record for a June primary, with more than 487,000 ballots cast & more still coming in. The previous high in Iowa was 449,490 in 1994. My hats off to Iowa voters, poll workers and county auditors. Awesome job! #BeAVoter pic.twitter.com/kwC1ayV35V

Large numbers of people also switched to voting by mail in Pennsylvania because of a new law expanding the option. Many polling sites still saw long lines, but officials said there main concern is now counting the increased number of absentee ballots.

“Maybe a tenth of the mail ballots were cast in the 2016 primary as opposed to what we might be expecting now,” Michael Sances, a political science professor at Temple University. “Early signs are good that the primary was able to be conductive without a hitch, again with that said, it’s going to take a while to count all those ballots.” 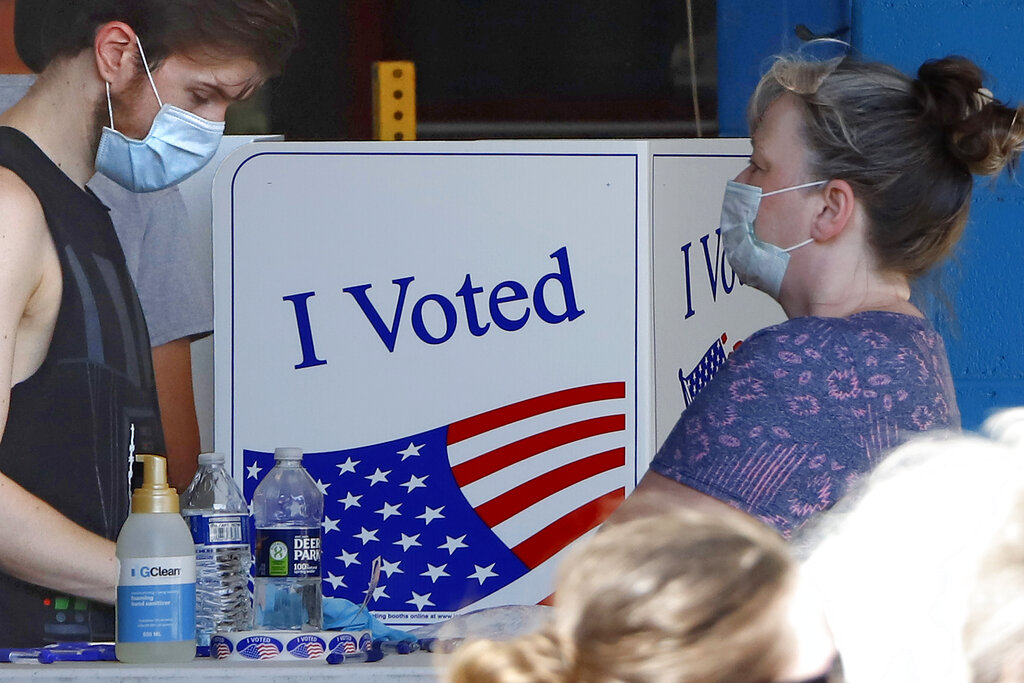 A voter fills out his ballot as a woman waits her turn during primary voting at the public safety building in McKeesport, Pa., Tuesday, June 2, 2020. (AP Photo/Gene J. Puskar)

Decisions to deliver mail-in ballots have also been largely nonpartisan. In Montana, where the governor is Democrat and the secretary of state is Republican, the primary was held entirely by mail. Nearly 100,000 more people voted this primary than in 2016, which set a record turnout for a Montana primary.

According to reports, the high turnouts could encourage more states to take similar steps ahead of the November general elections.

Meanwhile, South Carolina election officials are preparing for a huge influx of absentee ballots ahead of Tuesday primaries and New York Gov. Andrew Cuomo (D) recently extended the amount of time residents have to send in their absentee ballots.