Home » Election 2020 » President Trump on rocket launch: ‘More than an act of history, but an act of heroism’

President Donald Trump walks to the podium to speak during an event at the Vehicle Assembly Building on Saturday, May 23, 2020, after viewing the SpaceX flight at NASA’s Kennedy Space Center in Cape Canaveral, Fla. (AP Photo/Alex Brandon)

President Trump spoke at the at Kennedy Space Center in Cape Canaveral, Florida, moments after NASA and SpaceX made history. On Saturday, they launched two American astronauts out to space for the first time in nearly 10 years.

Falcon 9 launches Crew Dragon on its first flight with @NASA astronauts on board! pic.twitter.com/FUd0SSRKud

Before commenting on the successful air launch mission, the president spoke on the death of George Floyd. He called it a “grave tragedy” that never should have happened.

“My Administration will always stand against violence, mayhem, and disorder.

We will stand with the family of George Floyd, with the peaceful protestors, and with every law-abiding citizen who wants decency, civility, safety, and security.” pic.twitter.com/Wxk6qmBR69

The president then announced that the SpaceX rocket had reached low Earth orbit and said the astronauts had achieved a “true act of heroism.” 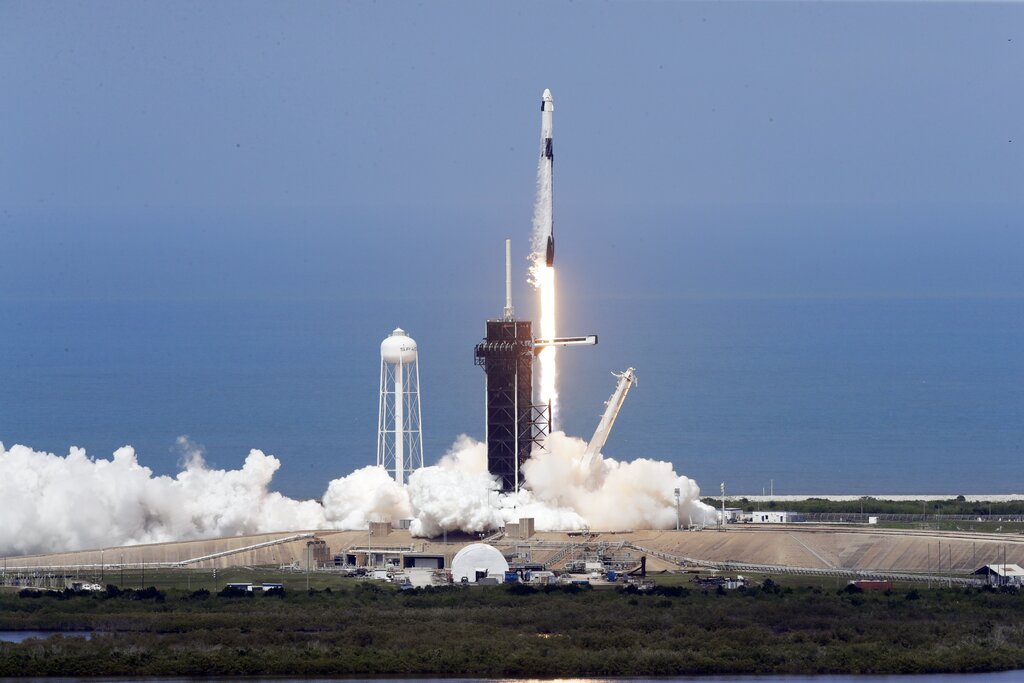 A SpaceX Falcon 9, with NASA astronauts Doug Hurley and Bob Behnken in the Dragon crew capsule, prepare to lift off as the vehicle vents fuel, from Pad 39-A at the Kennedy Space Center in Cape Canaveral, Fla., Saturday, May 30, 2020. (AP Photo/Chris O’Meara)

He also touched on the future of a “new mission” to launch astronauts to Mars and suggested the country has regained its power as the world’s leader.

“By 2024, our astronauts will return to the lunar surface to establish a permanent presence and a launching pad to Mars,” stated President Trump. “The first woman on the moon will be an American woman.”

The president ended on a positive note and reassured Americans that “our finest days are just beginning.”