Volunteers clean up broken glass and damaged merchandise at The Pike Outlets on Monday, June 1, 2020, in Long Beach after overnight protests over the death of George Floyd . Floyd died in police custody on Memorial Day in Minneapolis. (AP Photo/Ashley Landis)

As civil unrest over the death of George Floyd continues across the country, thousands of Americans are joining together to clean up the resulting devastation.

More than 30 U.S. cities have seen protests, rioting and looting in the wake of the fatal arrest. This has also led to mass destruction of public buildings and private businesses.

While many residents are looking at the aftermath as collateral damage of a worthy cause, others are condemning the violence and vandalism. This includes Boston security guard George Palladino.

“I know they had a good protest yesterday,” he stated. “And stuff like this definitely hurts and makes that protest look bad, even though they tried to do something good.”

As recent events have caused division among Americans, many people like Santa Monica teen Sophie Davison are noting that it’s also bringing communities together.

“Seeing other people, just community members, donate their time and be out here and to clean up it is actually really inspiring,” she stated. “It kind of like shows us that good things can come from bad things.

However, it’s not just locals who are banding together. Pierre Paul drove from Illinois to help organize the Minneapolis Target store cleanup. 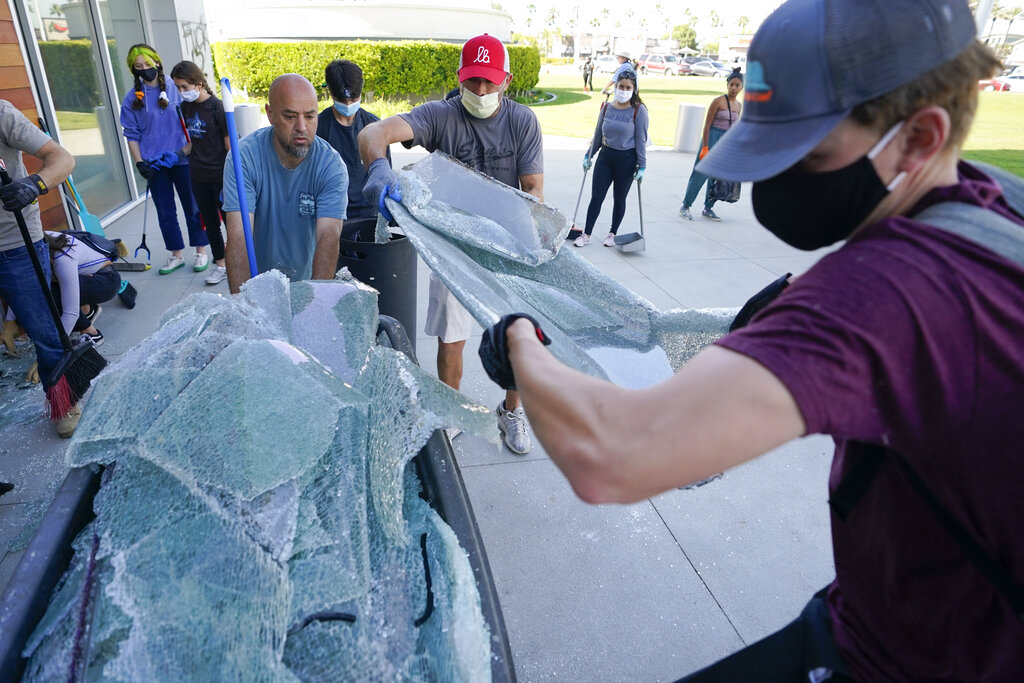 Volunteers clean up broken glasses and at The Pike Outlets, Monday, June 1, 2020, in Long Beach after overnight protests in reaction to George Floyd’s death while in police custody on May 25 in Minneapolis. (AP Photo/Ashley Landis)

Although some city officials have organized restoration efforts, the turnout of volunteers has eclipsed those of hired cleanup crews in most cases. Denver Mayor Michael Hancock voiced his appreciation and surprise at the number of locals who showed up to help.

“This morning we were all grateful to wake up and to hear about a couple hundred volunteers who showed up unsolicited to help clean up our downtown area and we want to send a very special thank you to everyone who helped clean up around Civic Centers Park this morning and this afternoon,” he stated. “We are enormously grateful.”

“And what I love to see here is so many people coming downtown to help,” she said. “To help clean up, to remove graffiti, to reclaim the city that they love and that’s the spirit we have to be about going forward.”

As the country remains in a state of upheaval and uncertainty, many Americans are hoping efforts to rebuild will help heal the growing division among citizens.